Warning: "continue" targeting switch is equivalent to "break". Did you mean to use "continue 2"? in /homepages/5/d591958472/htdocs/NorthWalesRock/wp-content/plugins/types/vendor/toolset/types/embedded/includes/wpml.php on line 660
 Bus Stop Quarry | North Wales Climbs 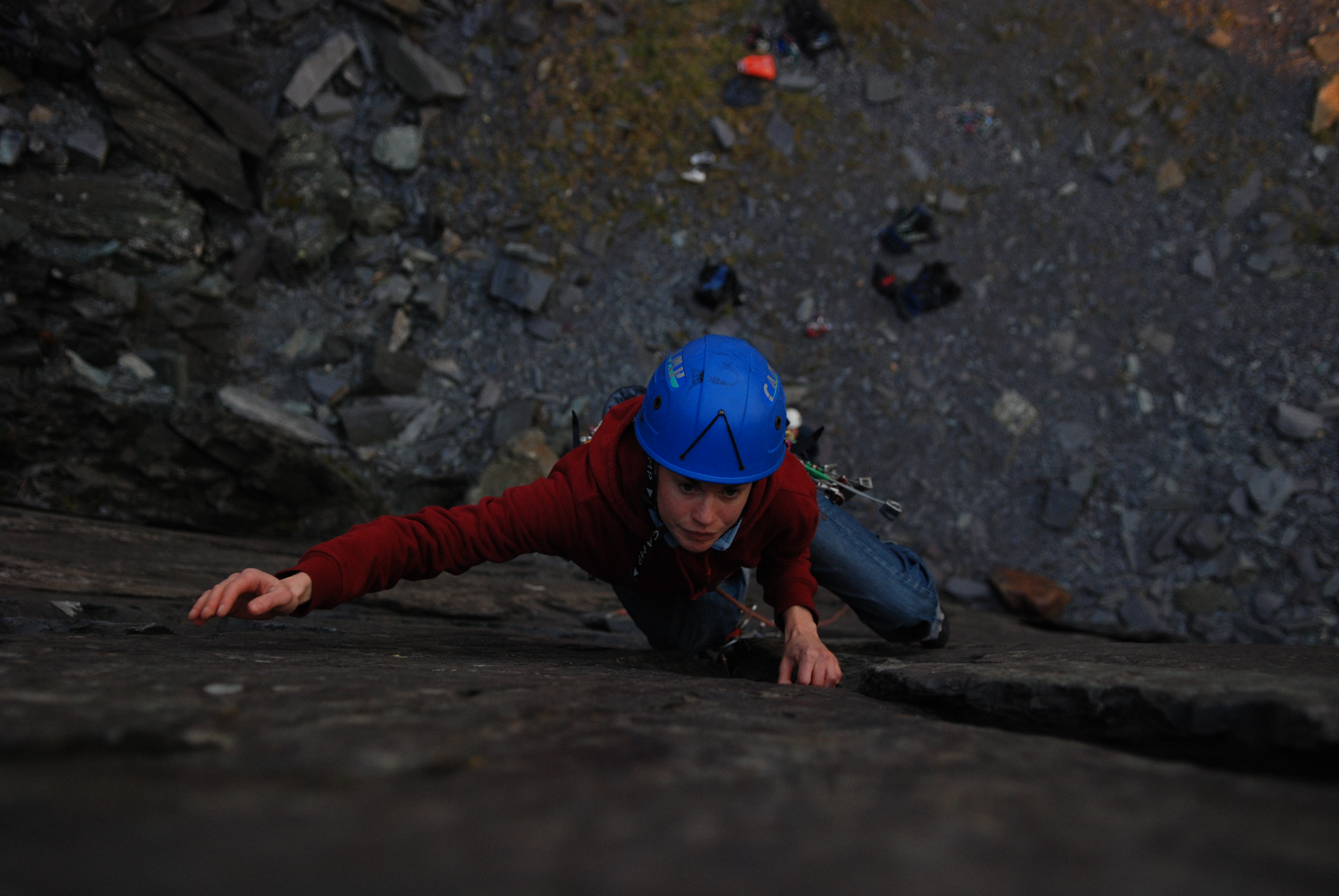 Bus Stop Quarry is the easiest of all the quarries on the Slate to visit. Literally a stones throw from the road the routes can be access in seconds from the car. There is now a good mix of sport, trad and run-out slabs.

Most of Bus Stop was re-equipped fairly recently, and most of the bolted routes are already safe with resined in eco-anchors. Exceptions are Meltdown, Wizz Bang.
New bolt belay on Fools Gold.

First Stop’ F5a 13m
Takes the clean grey buttress on the extreme left side of crag. Very pleasant climbing past 3 bolts to twin lower off. NB the Lower off has been pinned to the crag behind after concern is was just a small perched block.
FA-Colin Goodey and Sue Traynor 14th October 2009
Septuagenarian F6a 16m.
The route starts at a clean slab in the middle of the wall below a cleaned overhang.Climb directly over this to gain a cleaned but shattered ramp(more cleaning needed-but will improve with traffic and my further input) Move right along the sloping ramp to a line of 3bolts leading steeply up to a double bolt and ring lower off .6 Bolts protect.
FA: Colin Goodey,Sue Goodey & Diane Kelly.11th August 2009.
Ferrero Roche MVS (F5a).
This is the renovated version of an old route(Mud Slide Slim of 1986-following the obvious corner on the right) The route has been stripped of huge amounts of loose rock,heather,ferns,mud ,grass and dust and twin lower offs fitted-all aimed at making the route more popular.The route is potentially very good and will improve with further use.
Cleaned and renamed with first accenionists permission by:
Colin Goodey, Sue Goodey and Diane kelly. 8th August 2009.
Wizz Bang f6c
The Big Easy F4
Takes the short slab up on the left when walking behind the fools gold wall. 3 bolts to a double bolt belay. FA Phil Targett 02/0308
Jagged Face F4
Start just right of The Big Easy 3 bolts to a shared lower off. F.A. Michael Hurst, Brett Wedley, Tim Muller 21/05/08
Comfort Zone F 5b –
A very pleasant natural line on the towering buttress up and right of the Jagged Face slab. Start in an obvious square cut recess on the left side of the buttress.Climb steeply through an overhang to gain easier but pleasant climbing above past three bolts to double lower off. FA : Colin and Sue Goodey 8th October 2009.

Upper Level (Above and behind Solstice and Equinox etc)

Finatic F6c New route (At the back of the bay above and behind Fools Gold) takes a line between 2 fins of rock 3 bolts to a lower off. FA Ian Lloyd-Jones and Phil Targett 15/12/07

Bosch Stop Quarry F6a+ New route takes the shallow groove left and round the corner from Jenga. 4 bolts to a double resin bolt lower off. FA Ian Lloyd-Jones 13/12/07
Bish Bash Bosch F6a+ New route left of Bosch Stop Quarry.Start on a sloping ledge 3 bolts lead the way to a double resin bolt lower off. (The lower off can’t be seen from the last bolt..keep climbing and it soon appears!) FA Ian Lloyd-Jones 14/12/07

Fool’s Gold E1
A classic E1 and one of the many trad climbs worth climbing in the quarries. Caution is starting to be needed as the flake that makes the ledge you mantel after the crux is slowly coming away from the crag.
Scare City E6 6a F6c+
bold route with bouldery start to two spikes (possible skyhook) then hard moves v.poor wallnut 2 in flake on right. gain the pocket and place up to 4 cams! (size 00 to 2.5?) then easy runout climbing to final crux skhooks and poor RP to pull over the top!
Raisin Frumpsnoot F7b
New sport route between Scare City and Forsinian Motspur.
A. Wainwright 05/05/07
Beltane F7a+
New sport route right of Forsinian Motspur.
A. Wainwright 30/05/07
Solstice Direct E2
The direct finish to solstice is about E2 and now the starting flake has fallen off more in keeping with the rest of the route. Small words helpful. Basically from the top of the short layback section head straight up the small groove.
Equinox VS
A great route with tricky to arrange protection
Stirling Silver (E2 5c) Tried climbing this today (2012/12/02) and the first large suspect flake detached and now reside on the floor. Looks like several flakes above are loose too. APPROACH WITH CAUTION!!!

Walking Out E6 6b/c f7b? **
climb to bolt on gnat attack and travers out left for 4m until under blankest section with “cleaning sploges” leading the way! make some very runout sequecy insecure moves until barndoor crux leads to good holds above and left of 2nd bolt on gnat attack, run it out to the top! siderunnerless accent would be about E8