Warning: "continue" targeting switch is equivalent to "break". Did you mean to use "continue 2"? in /homepages/5/d591958472/htdocs/NorthWalesRock/wp-content/plugins/types/vendor/toolset/types/embedded/includes/wpml.php on line 660
 Vivian Quarry | North Wales Climbs 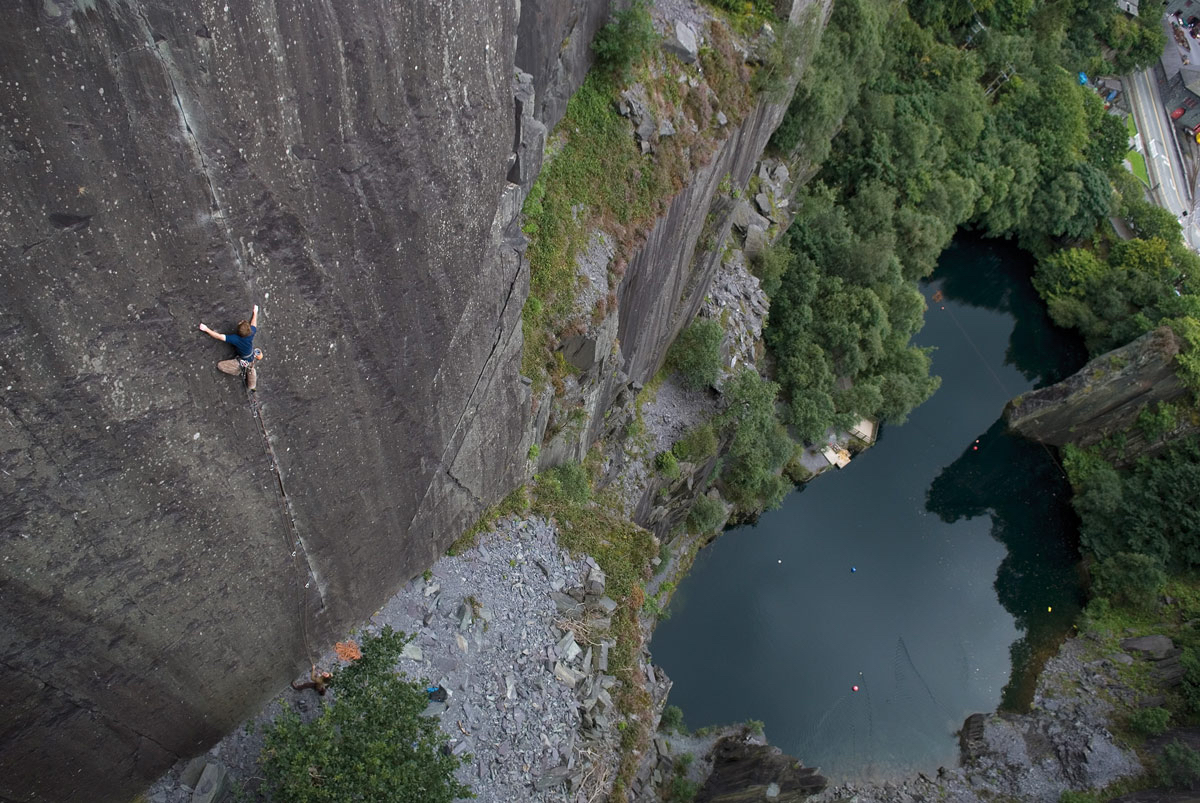 Vivian Quarry is another classic slate destination, with the most iconic trad route Comes the Dervish being something of a central showpiece. There are other great routes scattered amoung the many levels

The East Face of Vivian ED1(E2)
A link up of pitches that deviously winds its way up the East face all of which have been re-equipped, start up Mentil lentils, Monster Kitten, To Bald to be Bold instead of heading to the conscience level traverse down and right into the amazing hanging stance of Turkey Chant, Lower off onto the CL, take in a route on this level (Is it a Crime?) then head to the dervish slab to Last Tango in Paris, traverse across to the dervish belay and climb The Missing Link, swing/climb onto the Ritter sport level and finish up Two Tone. Harder variations exsist! This route is yet to have an in a day ascent!

Moving Being E4 6b
Both bolts on the slab replaced. Old bolts still there. 09/07. Lower off has eco bolt from 2001 (?) and another old bolt.
Monster Kitten. E1. lower off. 2001
Mental Lentils. HVS. new bolts 02/07. New lower off 2001
Time Bandit. F7b? new bolts. 2001.
!!!!!The bay containing Weetabix Connection has been badly affected by a massive rockfall Avoid these route as unstable rock is still above!!!!!
The Weetabix Connection F6c+ Re-bolted. Old bolts still in place. Placed 2 new bolts on belay/lower off – unfortunately hammer broke on 2nd bolt so this has been left protruding (needs sorting out, perhaps when somebody goes to re-equip Bobby’s Groove). Safe enough with the other new and the old bolt for now. 09/07
Two Bolts or Not To Be F7b+ New bolts.Old bolts still there.09/07. Belay (shared with Bobbys Grove) replaced 10/13
Psychotherapy E2. New bolts and lower off. One bolt added near top to protect the better and more sustained direct finish. 02/07
Dwarf Level
Teliffant E4 6a **New double bolt belay and old bolt on crux replaced.Old bolts still there. 09/07
To Bald to be Bold E2 5c *, one bolt replaced, another bolt added to aid a traverse into Turkey Chant making an excellent two pitch E2. Needs old bolt removing.
Turkey Chant E2 5b ***. Two bolt belay install at start, bolts replaced and lower off added, one of the lower off bolts is just over the top of the crag. Needs old bolts removing.

Gideon’s Way E4 6a * Uses the same bolt as The Dwarf and same lower off. All new 05/16. Peg in borehole is poor. Rock a little fragile/expando around the peg.
Nostromo wall
Misogynists Discharge. F8a+. Re-equipped and lower off. 12/06
Colditz. F7b+. New lower-off and last two bolts 12/06. First two bolts now replaced and old ones removed 10/13
Manic Strain 8a. Re-equipped 3/12. Old bolts need removing.
Gin Palace F7c. Re-equipped as a sport route. 10/06
Child’s Play F7a+. Re-equipped as a sport route. 12/06
Dervish Slab
Lower off on Comes the Dervish and Last Tango… replaced. Old bolts need removing.
The Missing Link E1/2 5b. New route that climbs the slab above the Dervish, care is need not to knock any debris down, as you traverses the ledge from the dervish belay to the route.
Pole Dance– E6 6b Sept 2011 Mark reeves & L Morris
Was considering calling this ‘The Fifth’, after the famous ‘Ammendment to the US consitution, as I think it is the first route to put new guide out of date. Sorry!
Basically this is an ultra bold and thin Eliminate. Climb Flashdance to the first good runner past Last Tango, Move right and mantel the crack, make a scarey sequence of moves up and right towards the base of the hand traverse on Last Tango. The holds lead you to a good hold below its start, and a step right onto the ledge. Follow Last Tango to the overlap, and step over this rightwards to gain the arete, follow this to the top.
Conscience Slab
!!!The has been a massive rockfall from above the Conscience Slab and the bolts and rock here have been damaged. Climb with caution or better still avoid!!!
The ‘very bad step’ is now protected by three bolts.
There are two routes just after the ‘very bad step’
Abseil bolt placed at base of Spark that set the Flame (to access top of Teliffant) – could also be used to reach and re-quip Watching the Sin Set. Watch out for loose rock on slope (i.e. wear a helmet if you go to re-bolt this).

The Hot Knives Level
**The Manimal6b+, the route needs a couple of small wires to get to the first bolt. Rebolted 05/08/07

Birdsong 6a+. New route. Takes a line up the arete on the left hand side of the level passing 4 bolts to a lower off. Strange crux at the top. F.A. Phil Targett I Lloyd-Jones Both lead 13/05/08