Warning: "continue" targeting switch is equivalent to "break". Did you mean to use "continue 2"? in /homepages/5/d591958472/htdocs/NorthWalesRock/wp-content/plugins/types/vendor/toolset/types/embedded/includes/wpml.php on line 660
 Rainbow Walls Lower | North Wales Climbs 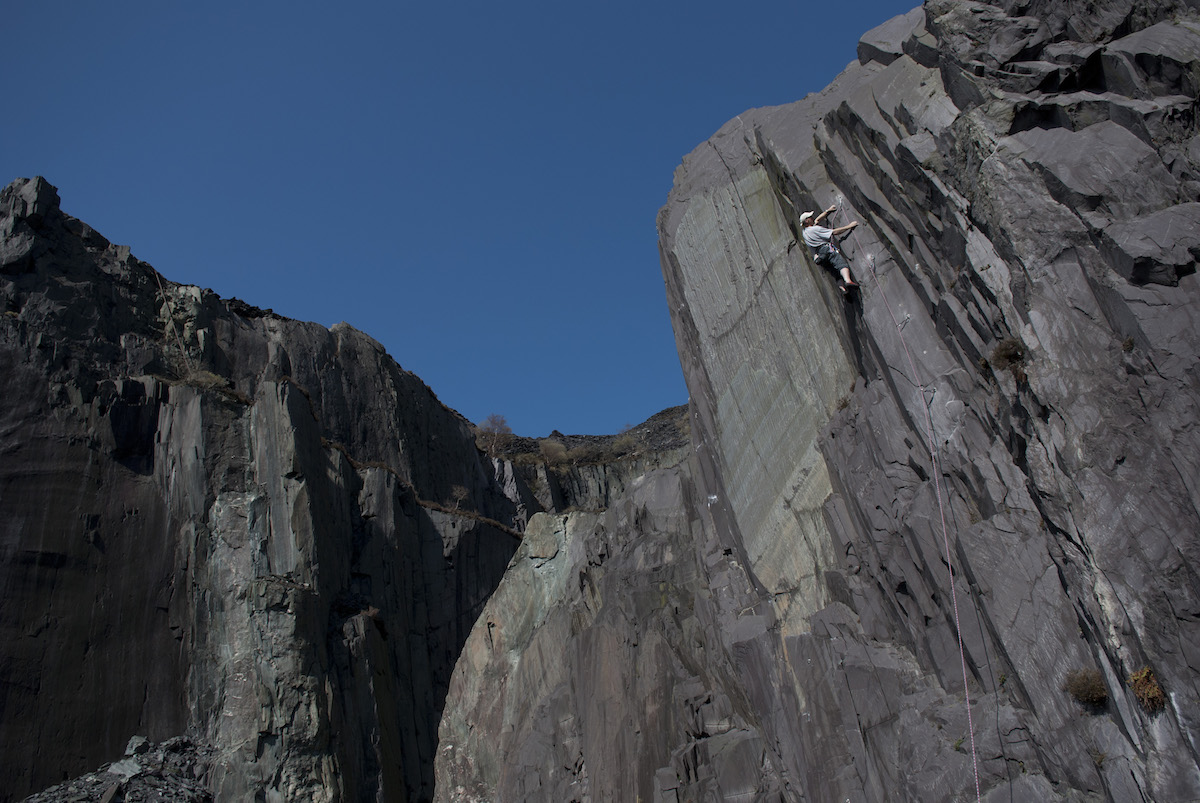 Gerbil Abuse F6c+. Re-bolted 02/07
Vermin on the Rediculous F7b. Re-bolted. 02/07
Spleenal Flick E3 6b. [F6c+?] Re-equipped one bolt added at the top, the rock at the bottom is a little loose. 03/07
The 3:10 to YMA E4 6a
bounce off the rail tracks onto the juggy rib on your left and gain the arete which leads to a chunky auburn thread. Step right and stretch for the dogleg crack which leads (awkwardly) up rightwards to the convenient Chitra lower-off.
Tim and Lou Neill October 2014
Chitra F7c+. Re- bolted. 03/07

Over Taken By Department C F6a **
Start just left of Taken Over By Department C. Climbs the thin green Dolerite Vein to gain the hanging slab, follow the hairline crack to the lower off . 8 Bolts lead the way. FA Ian Lloyd-Jones, John Roberts and Peter White 15/6/08
Taken Over By Department C F7a. Re-bolted. 03/07.
Slight of Hand F6c **. Three bolts to lower off. 3/07
Nik-Arete F6b+. New Route. 25/03/07.
Slab and arete left of Cig-Arete.
F.A: Pete Robins, Mark Reeves, (+one other too ashamed to admit involvement in such a **** route, come on Adam Wainright, own up!)

Waiting on an Angel E1 5b. The obvious groove left by massive rockfall left of Cig-arete. one bolt and a few small wires. 03/07.

Cig-Arete F7b. New bolts one added to stop a ground fall after a rockfall raised the level of the floor and lower off. 09/06.
Where are my Sensible Shoes F7a+. New bolts equipped as a sports route and lower off. 10/06 (Jules Littlefair reports: “one of the anchor bolts on Sensible Shoes is loose (the whole bolt, not just the hanger). Obviously there are 4 others to choose from.” May 2012)
Where are my Sensible Shoes Direct F7a+
Follow Where are my Sensible Shoes to the break by the final bolt. Surmount the stupendous summit headwall direct via a hold.
FA. Adam Wainwright (unseconded) 25/03/07
Gwion’s Groove F6a. clip 1st bolt on Sensible Shoes and follow the bolts into drowning man. 3/07.
F.A: Mark Dicken, Sam Dicken.
Drowning Man F6b. New bolts equipped as a sports route and Lower off. 10/06
Coming up for Air F7a+. Re-bolted (06/2007)
Unchain My Heart E3 5c *
Bold but easy climbing up the slab to the right of the crack leads to a flake on the arete. Step back right and move up to the obvious layback feature. A heart in you mouth move up this lead to the first and only bolt on the route, ironically after you have done the crux. Carry onto to the top.
Emerald Eyes VS,
a previous guidebook mistake. Could probably do with a lower off, as its good, but getting down isn’t.
Home is Where the Heart E5/6 6b *
The obvious and intincing crack line to the left of Concorde Dawn. Climb the sustained and technical crack until you can move out right to climb easier ground past two bolts.
Drew Fineron May 2015
Concorde Dawn. F8a.
A desperate start leads to more desperate climbign to reach and pass the first break. It doesn’t get any easier until a desperate finale to reach a hold on the right side of the nose. NB the bolts are already corroded as the hangers are stainless and the bolts are steel!
F.A: Rob Murfin [2006]
Jon’s Project! To the right of Concorde Dawn the obvious partially cleaned line with single lower off anchor and one bolt half way down. Cheers, Jon R 10/04/11

Jugs Mawr 22m E3 5c **
Climb the middle of the steep dolerite wall to the left of Honorary  Limestone on massive jugs to gain a crack. Follow this briefly to a peg and move up past pockets to another large break. Carry on up past a small thread and peg. Step right into the lower off on Honorary Limestone.

Honorary Limestone 22m ** F7a
A route that apparently wants to be a limestone sport route! The bolted ‘Dolerite’ line to the right of ‘Jugs Mawr’. Steep climbing via some great pockets leads to a crack, follow this up and left past the 5th bolt. Continue left along the break to join Jugs Mawr Briefly. Precarious / airy moves back rightwards will hopefully gain the 6th clip. Continue up more easily to the lower off.  FA Ian Lloyd-Jones 22 /3/12

Chinook Arete 23m ** F7a Climbs the bolted square cut arete to the right of ‘Midnight Drives’. If you enjoyed G’Day Arete you will probably enjoy this one, some cool moves and probably a grade harder. FA Ian Lloyd-Jones 22 /3/12

Follow this Link for a PDF topo of The Plateau Slab…. http://dmmclimbing.com/news/2012/05/more-new-routes-on-slate/

Circus Skills F6a 12m. Climbs a zig zagging line on the left side of the ‘Plateau Slab’ (just right of the obvious arete). Rock over up and rightwards past the final (5th) bolt to gain the ledge and lower off above. FA Tesni Lloyd-Jones (aged 12) and Celt Lloyd-Jones (aged 9) Both Lead 05/May/2012

Magic Carpet F5 14m Follow the obvious line of weakness to the right of Celtic Warrior, 5 bolts to a lower off.
FA Celt Lloyd-Jones (age 9) and Tesni Lloyd-Jones (age 12) Both Lead 05/May/2012

Teenage Dreams F6b **18m Climbs to the highest point on the ‘Plateau Slab’ start to the right of Magic Carpet on the far right hand side of the slab. Some nice moves in the centre of the slab with an easier finish. Lower off bolts on the final pinnacle.
FA Tesni Lloyd-Jones (aged 13) and Kieran Forrest (aged 11) 13/May/2012

Pick & Mix 6a 40m Start at the bottom left handside of Plateau Slab. Climb the first 3 bolts of ‘Circus Skills’, then fire up diagonally right until you reach the highest point of the slab and lower-off of ‘Carp Diem’ & ‘Teenage Dreams’. Take plenty of quickdraws. Abseil off.

Strawberry Jam E2 5c * 22m
Climbs the obvious large crack a few meters right of ‘Come Inside’.
A unnerving start past a large dangerous block (well tested) gives access to a brilliant jamming and lay-backing up the top hand crack.
Takes lots of cams. Double up on mediums, triple up if your a wimp

“HELP!” (it’s raining jugs) XS? 5c 22m
Climb ‘Strawberry Jam’ past the dangerous block and place the last of your protection. Then exit right up the narrow ramp running it out to the top. This is very loose, mostly at the top although the hold are jugs. 7/7/12 Dan Ely, Dan Hale